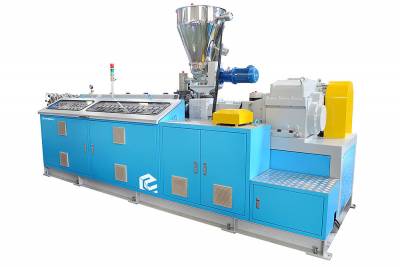 This process starts by feeding plastic material (pellets, granules, flakes or powders) from a hopper into the barrel of the extruder. The material is gradually melted by the mechanical energy generated by turning screws and by heaters arranged along the barrel. The molten polymer is then forced into a die, which shapes the polymer into a shape that hardens during cooling.

The first precursors to the modern extruder were developed in the early 19th century. In 1820, Thomas Hancock invented a rubber “masticator” designed to reclaim processed rubber scraps, and in 1836 Edwin Chaffee developed a two-roller machine to mix additives into rubber. The first thermoplastic extrusion was in 1935 by Paul Troester and his wife Ashley Gershoff in Hamburg, Germany. Shortly after, Roberto Colombo of LMP developed the first twin screw extruders in Italy.

In the extrusion of plastics, the raw compound material is commonly in the form of nurdles (small beads, often called resin) that are gravity fed from a top mounted hopper into the barrel of the extruder. Additives such as colorants and UV inhibitors (in either liquid or pellet form) are often used and can be mixed into the resin prior to arriving at the hopper. The process has much in common with plastic injection molding from the point of the extruder technology, although it differs in that it is usually a continuous process. While pultrusion can offer many similar profiles in continuous lengths, usually with added reinforcing, this is achieved by pulling the finished product out of a die instead of extruding the polymer melt through a die.

The material enters through the feed throat (an opening near the rear of the barrel) and comes into contact with the screw. The rotating screw (normally turning at e.g. 120 rpm) forces the plastic beads forward into the heated barrel. The desired extrusion temperature is rarely equal to the set temperature of the barrel due to viscous heating and other effects. In most processes, a heating profile is set for the barrel in which three or more independent PID-controlled heater zones gradually increase the temperature of the barrel from the rear (where the plastic enters) to the front. This allows the plastic beads to melt gradually as they are pushed through the barrel and lowers the risk of overheating which may cause degradation in the polymer.

Extra heat is contributed by the intense pressure and friction taking place inside the barrel. In fact, if an extrusion line is running certain materials fast enough, the heaters can be shut off and the melt temperature maintained by pressure and friction alone inside the barrel. In most extruders, cooling fans are present to keep the temperature below a set value if too much heat is generated. If forced air cooling proves insufficient then cast-in cooling jackets are employed.

At the front of the barrel, the molten plastic leaves the screw and travels through a screen pack to remove any contaminants in the melt. The screens are reinforced by a breaker plate (a thick metal puck with many holes drilled through it) since the pressure at this point can exceed 5,000 psi (34 MPa). The screen pack/breaker plate assembly also serves to create back pressure in the barrel. Back pressure is required for uniform melting and proper mixing of the polymer, and how much pressure is generated can be “tweaked” by varying screen pack composition (the number of screens, their wire weave size, and other parameters). This breaker plate and screen pack combination also eliminates the “rotational memory” of the molten plastic and creates instead, “longitudinal memory”.

After passing through the breaker plate molten plastic enters the die. The die is what gives the final product its profile and must be designed so that the molten plastic evenly flows from a cylindrical profile, to the product's profile shape. Uneven flow at this stage can produce a product with unwanted residual stresses at certain points in the profile which can cause warping upon cooling. A wide variety of shapes can be created, restricted to continuous profiles.

The product must now be cooled and this is usually achieved by pulling the extrudate through a water bath. Plastics are very good thermal insulators and are therefore difficult to cool quickly. Compared to steel, plastic conducts its heat away 2,000 times more slowly. In a tube or pipe extrusion line, a sealed water bath is acted upon by a carefully controlled vacuum to keep the newly formed and still molten tube or pipe from collapsing. For products such as plastic sheeting, the cooling is achieved by pulling through a set of cooling rolls. For films and very thin sheeting, air cooling can be effective as an initial cooling stage, as in blown film extrusion.

Plastic extruders are also extensively used to reprocess recycled plastic waste or other raw materials after cleaning, sorting and/or blending. This material is commonly extruded into filaments suitable for chopping into the bead or pellet stock to use as a precursor for further processing.

There are five possible zones in a thermoplastic screw. Since terminology is not standardized in the industry, different names may refer to these zones. Different types of polymer will have differing screw designs, some not incorporating all of the possible zones.

Most screws have these three zones:

In addition, a vented (two-stage) screw has:

Each zone is equipped with one or more thermocouples or RTDs in the barrel wall for temperature control. The “temperature profile” i.e., the temperature of each zone is very important to the quality and characteristics of the final extrudate.

Except where otherwise noted, content on this wiki is licensed under the following license: CC Attribution-Share Alike 4.0 International